Climate change threatens the rice crops of the Mediterranean

Two thirds of the rice consumed in Europe is produced inside the continent’s borders. In the Mediterranean basins, climate change is leading to temperature increases and more frequent and severe periods of drought, affecting water quality and reducing river flow. All these effects are increasing the salinity of the soil, with a negative influence on productivity. Climate change is also causing the sea level to rise and further increase the salinization of the coastal areas, deltas and estuaries where rice is grown. It therefore poses a threat to the existence of the rice sector in the Mediterranean area.

Finally, climate change is allowing tropical invasive species to settle in Europe and, consequently, the apple snail pest has recently entered Europe, eating rice plants and threatening European rice production. Indeed, one of the few strategies which has managed to curb the presence of apple snails in the fields has been to flood them with seawater. Unfortunately, the residual salinity following treatment with seawater may trigger crop losses, given that the varieties currently grown in the rice fields of the Mediterranean are highly sensitive to salinity.

Maintaining rice production in the face of this great threat is the challenge faced by the NEURICE (New commercial EUropean RICE) project, coordinated by the University of Barcelona and involving a total of 13 partners, including universities, research centres and companies. The NEURICE project, launched in March 2016, seeks to find new varieties of salinity-tolerant rice, enabling the rice sector to maintain its activity within this new scenario.

The research conducted in this project should obtain varieties of rice adapted to these areas, allowing the growing of crops to continue there, without losing productivity and maintaining the resulting positive impact in environmental, landscape and socio-economic terms.

What has been achieved so far?

In Asia there are now some tropical varieties of rice highly tolerant to salinity which cannot be grown in Mediterranean climates and are not commercially viable. It has recently been discovered that the salinity tolerance of these tropical Asian varieties can be explained by the presence of a small chromosome segment called Saltol. In order to incorporate this salinity tolerance into European commercial varieties, the NEURICE project researchers have used traditional non-transgenic plant improvement techniques.

The salinity-tolerant Asian varieties which contain this chromosome segment have been crossed with European varieties using non-transgenic biotechnology techniques (including molecular markers, cross-acceleration techniques and in vitro culture), a process that would normally last 10 years but which has been completed in 2.

Will salinity-tolerant varieties be as good as the current ones?

Once these varieties of rice with the Saltol fragment in their chromosome have been obtained, the project will then study their characteristics. The initial tests were performed on hydroponic crops in greenhouses, an environment that allows the degree of salinity tolerance of the new varieties to be evaluated in a more controlled, effective and rapid manner than in field conditions.

Following the identification of the most salinity-tolerant lines, testing has begun in the rice fields of the Ebro (Spain), Po (Italy) and Rhône (France) from 2018. These varieties have been grown in fields with and without salinity, in order to compare their production and agronomic behaviour.

The salinity-tolerant varieties that pass the field trials and which are best-suited to each country will be registered and marketed so that rice producers in these areas can continue to grow rice in fields with high salinity levels. The aim is for these varieties to be commercially registered and used by farmers by 2020.

The effects of climate change on crops in the Mediterranean deltas have led to abandoned fields which can no longer be cultivated. Abandoned and damaged areas can be recovered by planting these varieties, thereby increasing production.

One of the most interesting applications has been the development of online commercial sensors for the remote monitoring of salinity in the fields.

This means that irrigation can be tailored to the needs of the plants, with the consequent water savings, preventing salinity peaks in the fields and, consequently, falls in production.

In addition, the search continues for new salinity-tolerant genes and alleles in more than 500 varieties of rice around the world. New markers and genes are being sought so that, once the project has ended, the researchers can incorporate and improve them.

The NEURICE project is funded by the Horizon 2020 programme via the “Sustainable Food Safety” call. This four-year project (2016-2020) seeks to find new varietal lines to improve the production, stability and quality of European rice.

A consortium of 13 partners made up of universities, research centres and companies in Spain, France, Italy, England, Argentina and China are taking part in the project.

For further information on the project: www.neurice.eu 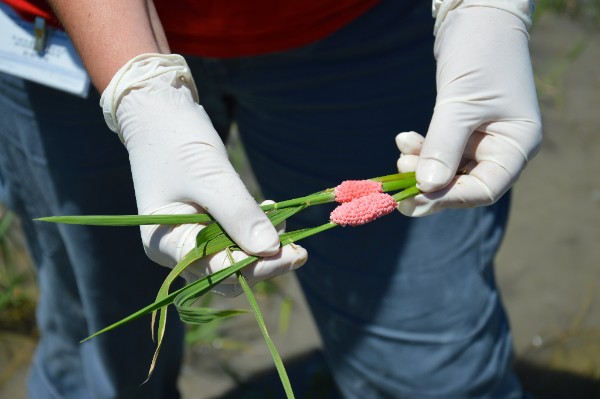