The Russian invasion of Ukraine has disrupted many markets and value chains globally. Besides the energy and agricultural commodities that have been widely analysed and commented on, there is another market where the war is highly impacting European agriculture, namely fertilisers.

Fertilisers are a major input in crop production, especially in cereals, oilseeds, and protein crops where they used to account for 17% of overall turnover and 42% of specific costs. This was true until 2021, when a first crisis took place: a demand shock in the wake of the global post- pandemic recovery. In this respect, the EU wholesale price for nitrogen solution has seen a 250% rise from January 2021 to February 2022. Despite the troubled market, EU growers have been able to source most of the fertilisers needed for this cropping season. However, the extra price we had to pay was not offset by the moderate grain price increase experienced since mid- 2021. All my European colleagues are now concerned as their income for the crop year 2022 is likely to shrink dramatically. 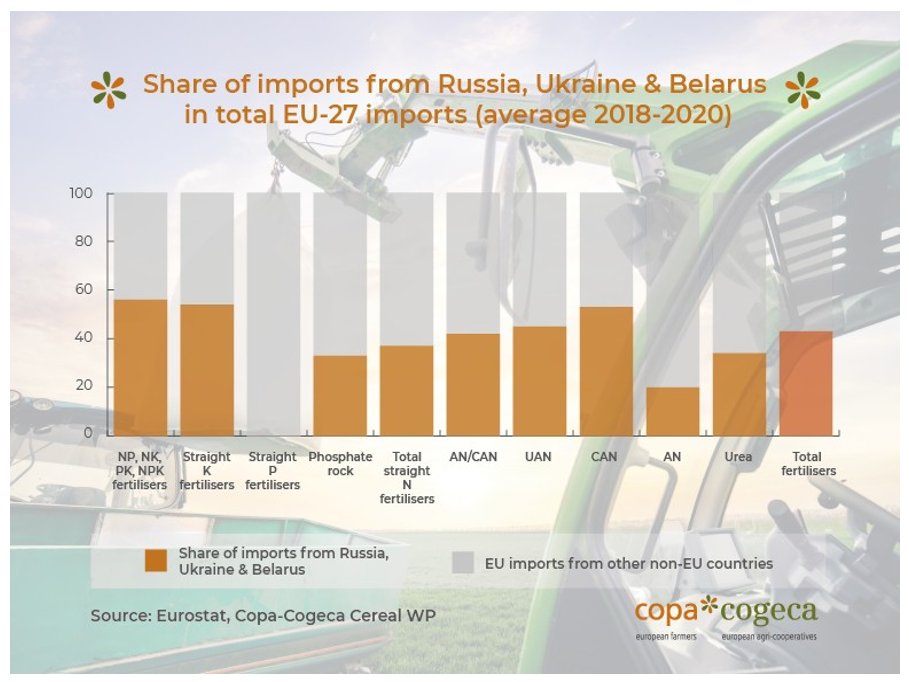 Since the Russian invasion on 24 February, fertiliser markets are witnessing a new crisis, in the form of a supply shock this time. Russia, B elarus, and Ukraine have stopped exporting fertilisers. As the EU is dependent on fertiliser imports and the three countries together account for 43% of our fertiliser imports, prices have made another jump to unprecedented levels, far above the already high pre-war prices. The price for nitrogen solution is now 370% above the level of January 2021. The worst is yet to come as supply shortages are expected in the coming season starting in May. Insufficient fertilisation will mean a loss of yield for the upcoming harvest. 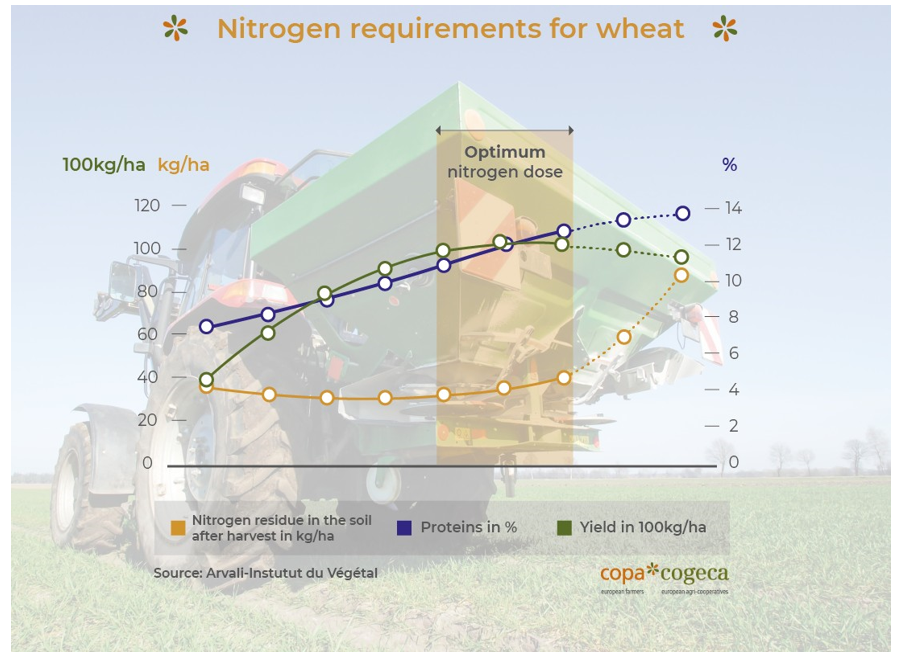 Since 24 February, European authorities have been quite proactive when it comes to the crisis affecting the energy and grain market. On 8 March, the European Commission published the REPowerEU plan addressing the oil, gas and electricity markets and proposing short term as well as long term measures. Similarly on 23 March, the Commission issued its Communication on food security, involving both long term and immediate measures designed to increase EU food production and support livestock and arable farmers impacted by high input prices.

So far however, Europe has fallen short of addressing the surge in EU fertiliser prices and the risk of fertiliser shortages, which essentially concern urea, nitrogen solutions, phosphates, and potash. Apart from long term objectives to reduce the EU dependence on imported gas and fertilisers and direct aid to farmers and the fertiliser industry in the short term, the European Commission’s communication does not address the ongoing structural imbalances in the fertiliser market. The EU farming community has been calling for years now for a change. Immediate EU political solutions exist that could be put in place to ease the pressure on EU fertiliser markets.

Nitrogen: while the EU is self-sufficient in ammonium nitrate, imports into the EU account for 36% of urea consumption and 30% for nitrogen solution. Moreover 34% of urea imports used to come from Russia, Belarus, and Ukraine, while the share was 45% for nitrogen solution, leading to a high risk of shortages in the months to come. The EU nitrogen market is protected by 6.5% import duties, aggravated by specific anti-dumping taxes affecting nitrogen solution from two of the major global exporters, Trinidad and Tobago and the USA. As a result, providers have a clear incentive to supply other markets rather than Europe. To prevent shortages, the EU urgently needs to suspend import and anti-dumping duties on urea and nitrogen solutions. Other short term complementary measures should include securing product flows from neighbouring exporters (notably urea from Egypt and Algeria), granting flexibility on REACH related import documents, and promoting the use of fertilisers supplemented with urease and nitrification inhibitors that enhance efficiency, allowing farmers to use 15% less nitrogen on average.

Phosphates and potash: imports account for the bulk of the EU consumption for phosphate rock and potash, and 33% of phosphate rock imports used to come from Russia, Belarus, and Ukraine, while the share was 54% for potash. This also leads to a high risk of supply shortage in the season 2022-2023. Given EU imports are duty-free, urgent actions include securing supply from alternative exporters (Morocco, Algeria, Egypt, Israel, Senegal, and South Africa for phosphates; Canada, Israel and Chile for potash), as well as delaying the implementation of the European Fertiliser Marketing Regulation that would prevent access or generate higher costs for accessing Northern African phosphates compared to other users such as Brazil.

Organic fertilisers: Farmers do not only use mineral fertilisers, but they also produce and use organic fertilisers, such as straw, manure and digestate from biogas plants. The Nitrates Directive sets limits for nitrogen from manure that can be applied annually at 170 kg/ha that leads to an unjustified distinction between organic matter from livestock manure and other organic sources.

In the medium term, Europe should of course work to curb its reliance on fertiliser imports, as rightly mentioned in the Commission Communication of 23 March. Measures aiming both at decreasing consumption and developing European fertiliser sources exist but will take time to be established. We agree with the European Commission that limiting nitrogen needs should be achieved by widely developing precision farming technology while using more efficient plant varieties and legumes (and perhaps other crops in the future) that can perform symbiotic nitrogen fixation from the air.

On the supply side, Europe should speed up the development of mineral nitrogen fertilisers produced from local green hydrogen, as well as enhanced nutrient recycling from local organic sources (livestock manure, biochar, wastes…).

Certain regions also have organic matter surpluses while others are in shortfall. It is essential to provide further incentives to support investments in the recycling of nutrients in organic matter and manure and break down administrative barriers to facilitate supplies of organic matter from regions with surpluses to those with deficits in the EU. For example, when the digestates are altered in any way such as composting or liquid-solid separation, they are again considered as waste and not as a component material of fertilising product falling in the scope of the EU Fertiliser Product Regulation, which runs counter to a proper management of this type of material and to the circular economy.

Emirates abre a maior quinta vertical do mundo no Dubai