European Parliament Resolution on Large Carnivores must not lose its bite!

Faced with the explosion of large carnivore populations, tomorrow MEPs gathered in Strasbourg will have to vote on a joint resolution on this burning issue. Despite the daily dramas that take place in European herds, it is feared that the proposal that the European Parliament could vote on would result in an empty shell, with paper measures that won’t respond to the urgency of the situation. For the European breeders, it is clear that any proposal that does not include article 19 of the Habitat directive, now 30 years old, will prevent any effective management of the populations of large carnivores.

The International Union for Conservation of Nature’s (IUCN) latest report classified three out of nine European wolf populations, three out of ten European brown bear populations, and three out of eleven Eurasian lynx in European populations, as of being the least concern. This is noted within the joint resolution proposed by the European Parliament on the topic. It is impossible today to deny that the explosion of large carnivore populations throughout Europe is a fact and a trend that is accelerating. 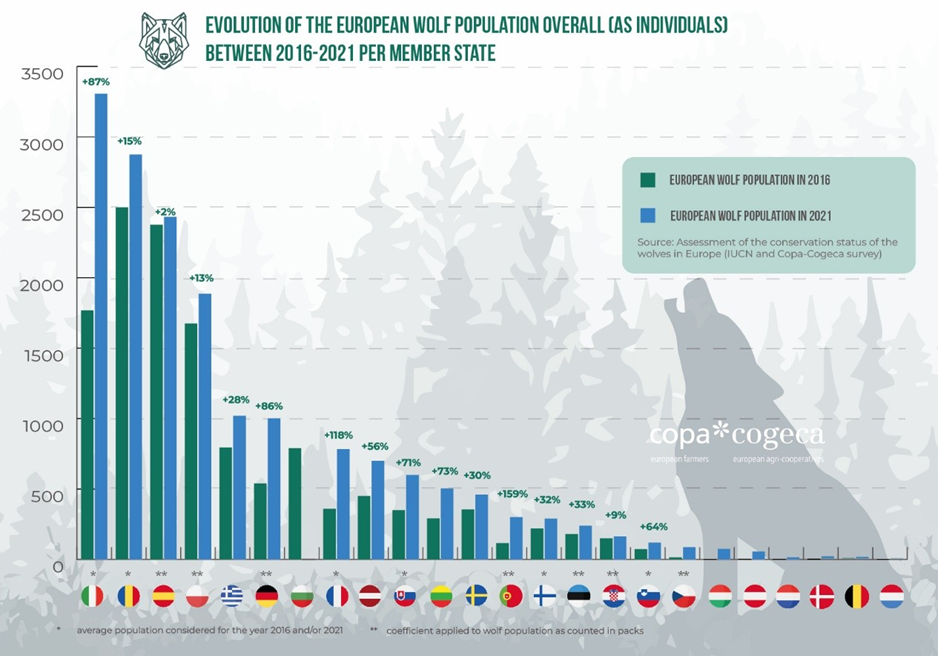 What the resolution does not mention is that there were circa. 942 wolf attacks in Germany in 2020 alone, and 5,085 attacks in Spain in the same year. It doesn’t note that in Romania there were around 3,800 attacks by wolves between 2018 and 2021; with nearly 30 humans being killed by bears in the same period. Wolf populations are estimated to be around 19,000 across the EU27, and around 21,500 in the greater European region, which is a significant increase over the past five years alone.

But with the current EU legal structure, farmers and rural dwellers are not even able to protect their families or their animals from attacks. The measures which have been proposed by the EU over the past decades are not ineffective when taken with the meagre and human-fearing carnivore populations that existed when the Habitats Directive first came into force. These same measures are now largelyredundant, overly expensive, labour intensive, and a hindrance to other species being reintroduced to our countryside. The Habitats Directive is 30 years old this year, and derogations have never been thought of by Member States as the concrete way forward, but more as bandages on an ever-growing wound.

This joint motion for a resolution neglects to utilise the one mechanism that is available within the Habitats Directive; to actually make concrete change for the Member States to take a hold of their large carnivore problem. Article 19 of the Habitats Directive is the only mechanism by which the annexes can be amended to ensure that population management can be done in a safe, legal, and effective manner to ensure the safety of our citizens. Calling for the use of Article 19 by the Commission only begins the process of the Commission looking at the population numbers and  possibly making  an  amendment  proposal  to  the  Council . If  the  current  motion  for  a resolution does not include references to Article 19 of the Habitats Directive, then this resolution is an empty expression by the European Parliament, with empty calls and empty requests.